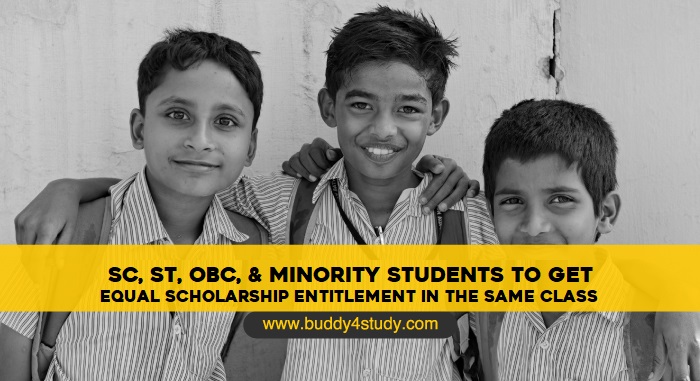 As per the new scholarship system proposed by the Centre, SC, ST, OBC, and Minority students studying in the same class will now be entitled for an equal scholarship amount.

New Delhi, 12 November 2021: The Central Government has proposed a new scholarship system for meritorious students belonging to Scheduled Castes (SC), Scheduled Tribes (ST), Other Backward Classes (OBC), and minorities communities. It primarily emphasizes on uniformity in entitlement, timeline, process, eligibility, and portal for all underprivileged students across India which will impact about 3 crore students coming from different sections of the society. Under this scholarship system, the amount of scholarship given to students in the same class will remain uniform for all castes and categories, and the income criteria of parents will also be the same.

As per a government source, “There has been an observation that children belonging to different castes studying in the same class get different amounts as scholarships. This is because these scholarships are disbursed by different central ministries. It was felt that this could perpetuate a divide amongst children. Therefore, the issue is being examined.”

Thus, following the directive from the Prime Minister’s Office (PMO), a group of ministers, headed by Defence Minister Rajnath Singh, closely examined this issue and decided on a rationalized model of scholarships.

Read further to know about the changes that have been proposed under the uniform scholarship system.

The table below highlights the variation in the amount of scholarship offered by different government departments for your reference.

However, as per the new scholarship system, this amount will be the same for all the categories. This does not mean any reduction in the scholarship amount, as suggested by one of the officials involved in the rationalization exercise.

Currently, the family income required for SC, ST and OBC students for pre-matric scholarships is INR 2.5 lakh per annum whereas for minority students, this income limit is INR 1 lakh per annum. Under the proposed scholarship system, this income criteria will be the same for all underprivileged children irrespective of their caste and category.

Additionally, the uniform scholarship system has proposed same timelines for scholarship disbursals across India. Presently, different ministries are disbursing the amount at different times after a lengthy scrutiny and verification process followed by states.

The government already has a centralised portal for scholarship applications. But now, it is proposing to digitize the verification process as well.