Study Abroad » Study in Mexico – All you need to know 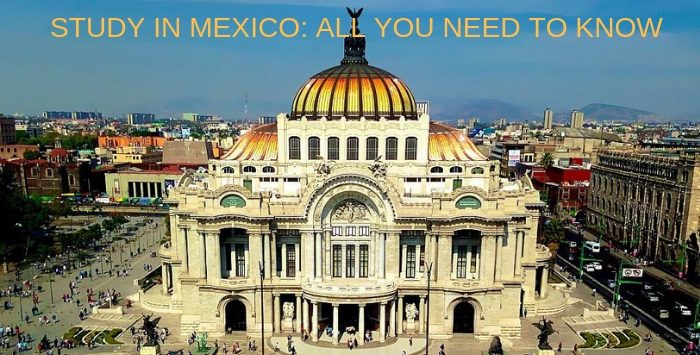 Mexico has always been one of the hottest travel destinations for tourists. Attracted by its gorgeous and diverse landscape, a unique culture that mixes tradition and modernity, and its delicious & lip-smacking cuisine, millions of visitors throng the nation each year. And now, even international students are visiting the country in large numbers to study in Mexico. With world-class universities offering inexpensive yet quality higher education, Mexico is fast becoming an international education hub.

Universities in Mexico follow a similar format to European universities. Mexico’s higher education system has consistently ranked among the world’s best. In fact, many of its over 2000 public and private institutions of higher learning feature among the top 200 in the world. Most public universities in Mexico have minimal tuition fees. While private universities charge substantially more, they are quite affordable compared to the US or Canada.

STUDY IN MEXICO FOR INDIAN STUDENTS

For Indian students too, studying abroad in Mexico promises to be a fulfilling and rewarding experience. The country shares a time-zone as well as its borders with the United States. This makes Mexico a viable business destination for American firms and companies who have a substantial presence in the region. Proximity to the US and affordability compared to its northern neighbors have also prompted major Indian IT firms like Wipro and TCS to establish their presence in Mexico. Moreover, while Mexico shares its borders with the USA, culturally it is quite similar to India. Mexico lies at that perfect sweet spot between third-world chaos and first-world comfort, and Indians are likely to view it with equal measures of fascination and familiarity.

It is important to note here that the language of instruction at Mexican universities is usually Spanish. Luckily, there are a few programs taught exclusively in English. However, students will be well advised to learn Spanish to get the most out of their study abroad experience.

The city of palaces, Mexico City, does not only hold the record for the city with the largest number of museums but is also home to some of the best universities in Latin America. At the top of the list is UNAM (Universidad Nacional Autónoma de México), consistently ranked the best in Mexico and among the top 150 in the world. Other notable universities include Ibero University, or Universidad Iberoamericana, a prestigious private university with notable alumni like Salma Hayek and Alejandro Gonzalez Inarritu.

Monterrey is the commercial, industrial, educational, and transportation hub of the northern part of Mexico. With a booming economy, it’s the second-richest city in the nation and an important hub for many global companies. The leading university in the city is Tec de Monterrey, or ITESM (Instituto Tecnológico y de Estudios Superiores de Monterrey), a private university founded in 1943. Ranked among the top 200 universities in the world, ITESM offers a wide range of undergraduate and postgraduate programs across disciplines.

Queretaro City, or Santiago de Querétaro, is the capital and largest city of the state of Querétaro, located in central Mexico. The city and its surroundings are home to some of the most important universities in Mexico with UNAM, ITESM and Universidad Anáhuac campuses present in the city. It is also home to the first U.S. university campus in México, A-State Queretaro, a campus of Arkansas State University, USA.

Puebla is the fourth largest city in Mexico and is situated close to Mexico City. The city is known for the many students coming from all over Mexico and the world to study at one of the prestigious universities, such as UDLAP (Universidad de las Américas Puebla) and BUAP (Benemérita Universidad Autónoma de Puebla). Puebla is a beautiful city and an amazing place to spend your time as an international student.

Located six hours from Mexico City, Guadalajara is the second most populated city in Mexico. The city is known as the “Mexican Silicon Valley” for being the most important technological cluster in the country. It is recognized worldwide for the development of the software industry. The city is also home to the University of Guadalajara, or UDG (Universidad de Guadalajara), regarded as the most significant university in the state of Jalisco and the second in the country, only behind UNAM.

STUDENT VISA FOR STUDY IN MEXICO

Indian students who wish to study in Mexico must obtain a Temporary Resident Visa for Students. To obtain the visa, you must get a letter of acceptance from the University mentioning the course details. You will also need to provide proof of economic solvency to cover the cost of studies.

Students must apply at the nearest Mexican consulate before traveling to Mexico.

You must note that a student visa does not give you permission to work in Mexico during your stay.

SCHOLARSHIPS TO STUDY IN MEXICO

Many public universities in Mexico offer scholarships to international students, which are also available to students from India.

The land of Mayan ruins, mariachi music, and tacos and tamales, has plenty to offer everyone. For Indian students, too, the country should definitely be on your list of countries to study abroad.