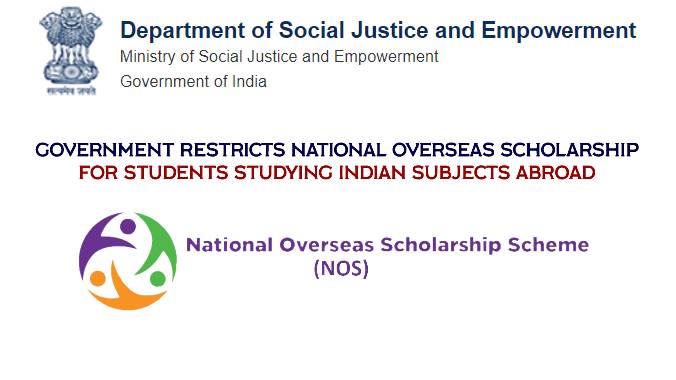 New Delhi, 25 February 2022 – Recently, the Ministry of Social Justice and Empowerment has issued new guidelines, preventing students from applying for the National Overseas Scholarship (NOS) to study several humanities subjects, including Indian history, culture and heritage in foreign universities. As per the latest reports, the ministry has sought functions for the same by 31st March 2022 (published earlier this month for the session 2022-23).

The Union Ministry of Social Justice and Empowerment has uploaded the revised guideline on its website under the sub-head Mandatory Conditions for its NOS scheme. According to the new clause, ‘Topics/ courses concerning Indian culture/ heritage/ history/ social studies on India-based research topics shall not be covered under NOS. The final decision as to which topic can be covered under such a category will rest with the election-cum-screening committee of NOS.’

The Centre’s move of barring the pursuit of humanities and social sciences courses related to Indian culture has attracted criticism from both the Opposition and the teaching fraternity. The revised guidelines of NOS, which was released on Saturday, 19th February 2022, have not only struck a blow to the main research work in the field of social sciences but also has adversely affected the students from marginalised sections to pursue topics or courses related to Indian culture, heritage, history and society.

The National Overseas Scholarship (NOS) provides financial assistance to students from marginalised sections who wanted to pursue post-graduation or PhD courses from foreign universities, which includes:

Senior Congress Dalit Chief PL Punia criticised the decision and pointed out, “This is an objectionable move. If an SC student wants to pursue super-specialisation in a selected Indian subject in a foreign college, he/she needs to be inspired and allowed to take action. This revision of guidelines would restrict the opportunity for scheduled caste youth. The federal government is pushing Dalits out of the higher education system.”

However, Prof Dilip Mandal, a journalist-turned-academician highlighted another grave aspect and tweeted, “The guidelines were tweaked in the last hours and the stakeholders like students, teachers and foreign universities were not even consulted before cementing the decisions. This would adversely affect many students, including the ones who have already completed their Masters and MPhil in Social Science subjects. With this revised guideline, the students would not be able to apply for this scholarship.”

He also added that this move may play out unfavourably for India as numerous foreign universities are showing potential interest and are encouraging Indian students to study and take up research in these fields.

Ministry’s Explanation of this Questionable Move

On Sunday, 20th February 2022, the Ministry said the decision was based on “more practical expertise”. R Subrahmanyam, Secretary of Social Justice and Empowerment Department, said the move was a considered one. He specified, “Indian universities already have rich resources and courses on Indian heritage and humanities. We have made an internal estimation within the ministry of the capabilities guiding high-quality research within the country and felt that the scholarship for studying abroad was not needed, especially to study Indian history, culture or heritage.”

He added, “For each of the subjects, students have to stay 3/4th of the time in India for their fieldwork and only 1/4th would be required abroad. So, we felt that the resources could be better spent on gaining expertise in other fields in foreign universities. Instead of studying Indian subjects abroad, students can pursue “new-age topics” in foreign universities and bring back that knowledge to India.”