To meet the changing dynamics of the requirement of society with regards to quality education, innovation and research, the Ministry of Human Resource Development is mulling to bring out the New Education Policy 2017 (NEP) in the ongoing Winter Sessions of the Parliament.

The objective of the NEP is to make India a knowledge superpower by equipping its students with the necessary skills and knowledge and to eliminate the shortage of manpower in science, technology, academics and industry.

For the first time, the Government of India embarked on a time-bound grassroots consultative process to enable the MHRD to reach out to individuals across the country through over 2.75 lakh direct consultations while also taking input from citizens online.

The National Policy on Education was framed in 1986 and modified in 1992. Since then several changes have taken place that calls for a revision of the Policy. Here, take a look at what are the changes and development have taken place so far:

The BJP-led NDA government has on October 23 announced that the National Policy on Education (NPE) will be rolled out in December. The new policy envisages correcting the current education system that has followed a colonial mindset, according to Union Minister of State for Railways Satya Pal Singh. 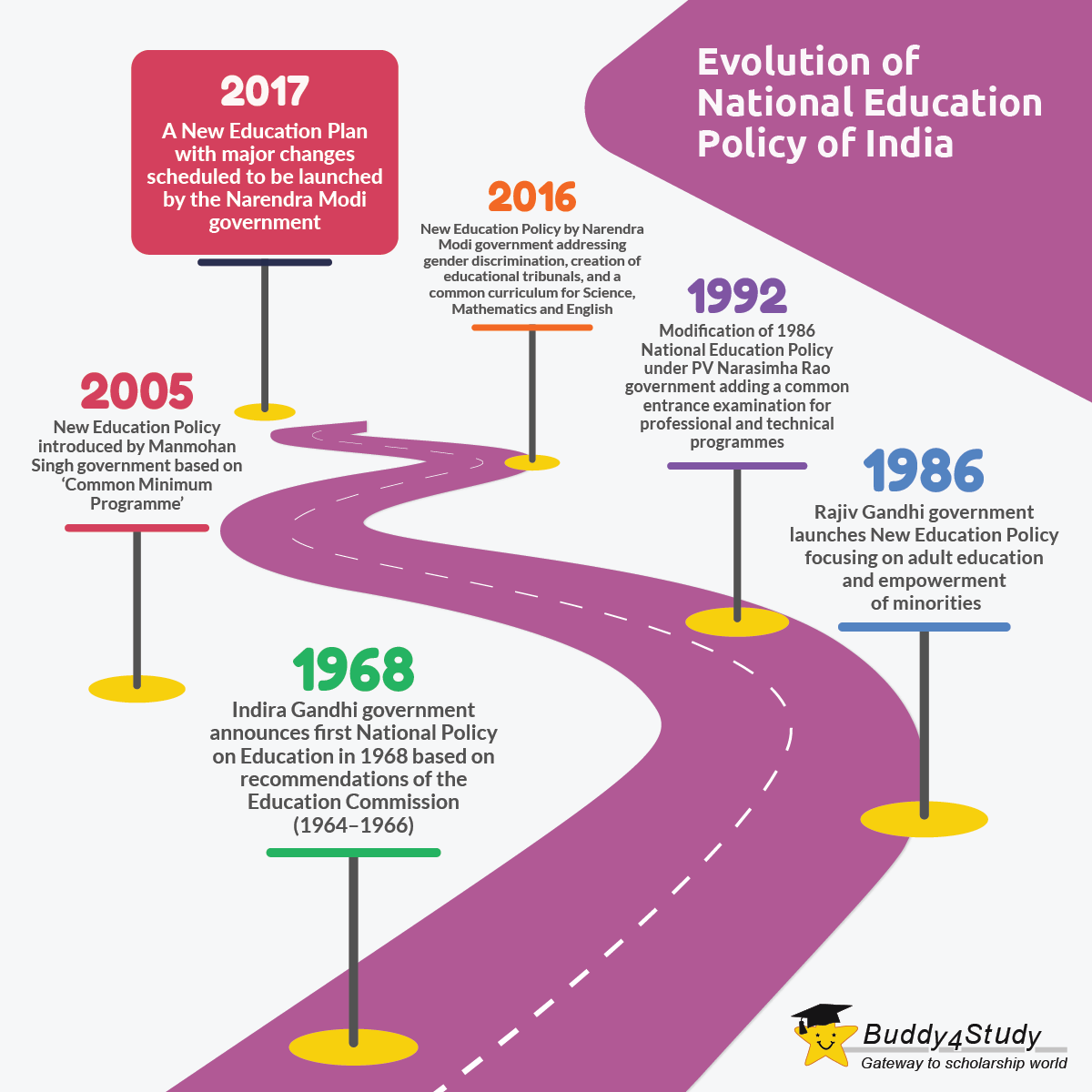 Calling for a “radical restructuring” and to equalise educational opportunities in order to achieve national integration and greater cultural and economic development, the Indira Gandhi government announced the first National Policy on Education in 1968 based on the report and recommendations of the Education Commission (1964–1966).

Calling for fulfilling compulsory education for all children up to the age of 14 and the better training and qualification of teachers, the policy focused on learning of regional languages, outlining the “three language formula” to be implemented in secondary education. The policy also encouraged the teaching of the ancient Sanskrit language, which was considered an essential part of India’s culture and heritage. The NPE of 1968 called for education spending to increase to six percent of the national income.

Calling for “special emphasis on the removal of disparities and to equalise educational opportunity,” especially for Indian women, Scheduled Tribes (ST) and the Scheduled Caste (SC) communities, the Rajiv Gandhi government introduced a new National Policy on Education in May, 1986.

The policy called for expanding scholarships, adult education, recruiting more teachers from the SCs, incentives for poor families to send their children to school regularly, development of new institutions and providing housing and services.

To have a “child-centred approach” in primary education, the new policy launched “Operation Blackboard” to improve primary schools nationwide.

The policy expanded the open university system with the Indira Gandhi National Open University, which was created in 1985.

The third NPE was promulgated in 1992 by the PV Narasimha Rao government, modifying the 1986 NPE. The 1992 NPE aimed at conducting a common entrance examination on all India basis for admission to professional and technical programmes in the country.

In 2005, Former Prime Minister Manmohan Singh adopted a new policy based on the “Common Minimum Programme” of his United Progressive Alliance (UPA) government.

The latest education policy was announced on June 30, 2016. The 43-page draft focused on addressing gender discrimination, the creation of educational tribunals, and a common curriculum for science, mathematics and English.

Revision of no-detention policy, promotion of Sanskrit, and bringing back Class X board examinations were some of the key changes that the policy carried out.